Time is super valuable. If we can save ourselves a few minutes or hours each day from having to do repetitive tasks, we can spend that saved time on activities we love. As programmers, we can automate some of these repetitive tasks and get back to living the life we want.

Let’s look at creating an application to do just that. Let’s create an app in Python that will connect the popular productivity tool, Notion, with the up-and-coming Natural Language Processing (NLP) Package Manager, Steamship. Our app will take an mp3 file we place in Notion, run it through the Steamship audio-markdown bundle and return the markdown to the same page as the initial mp3 file. Check out the GitHub here.

Notion is a project management software platform designed to help organizations manage their efficiency and productivity. You can configure the pages to hold whatever info you need. Each page can have as many “blocks” as you need to store the data in an organized fashion.

A block can be a table, a paragraph of text, an image, or any of the many content types Notion accepts. In our example, we create a block that holds an mp3 file. Then, we connect our Notion block to the Steamship audio-markdown bundle to transcribe the audio.

The first set of functions we’ll make are related to Notion. The notion.py file contains code to retrieve and return the mp3 file data we have placed in our Notion workspace. In the following photo, you can see our workspace and the mp3 file we have saved. The name of the mp3 file is cows_crows.mp3. This file contains a recording of me saying, “Cows can’t catch crows.”

To get started with the Notion API, go to their Developer Portal and Get Started with the API. From there, simply create your API integration and copy your API key. Save your Notion API key because we will use it later to connect Notion and Steamship.

Adjust your API settings as shown below – it should be able to read and update content.

Before working with the API on the page, you need to go to the upper right-hand corner of your Notion page and click the three dots. The drop-down menu should look like the one shown in the image below. Click the “More” button to add the Notion Integration you created earlier. In this case, I am calling mine “Testing with Steamship”. 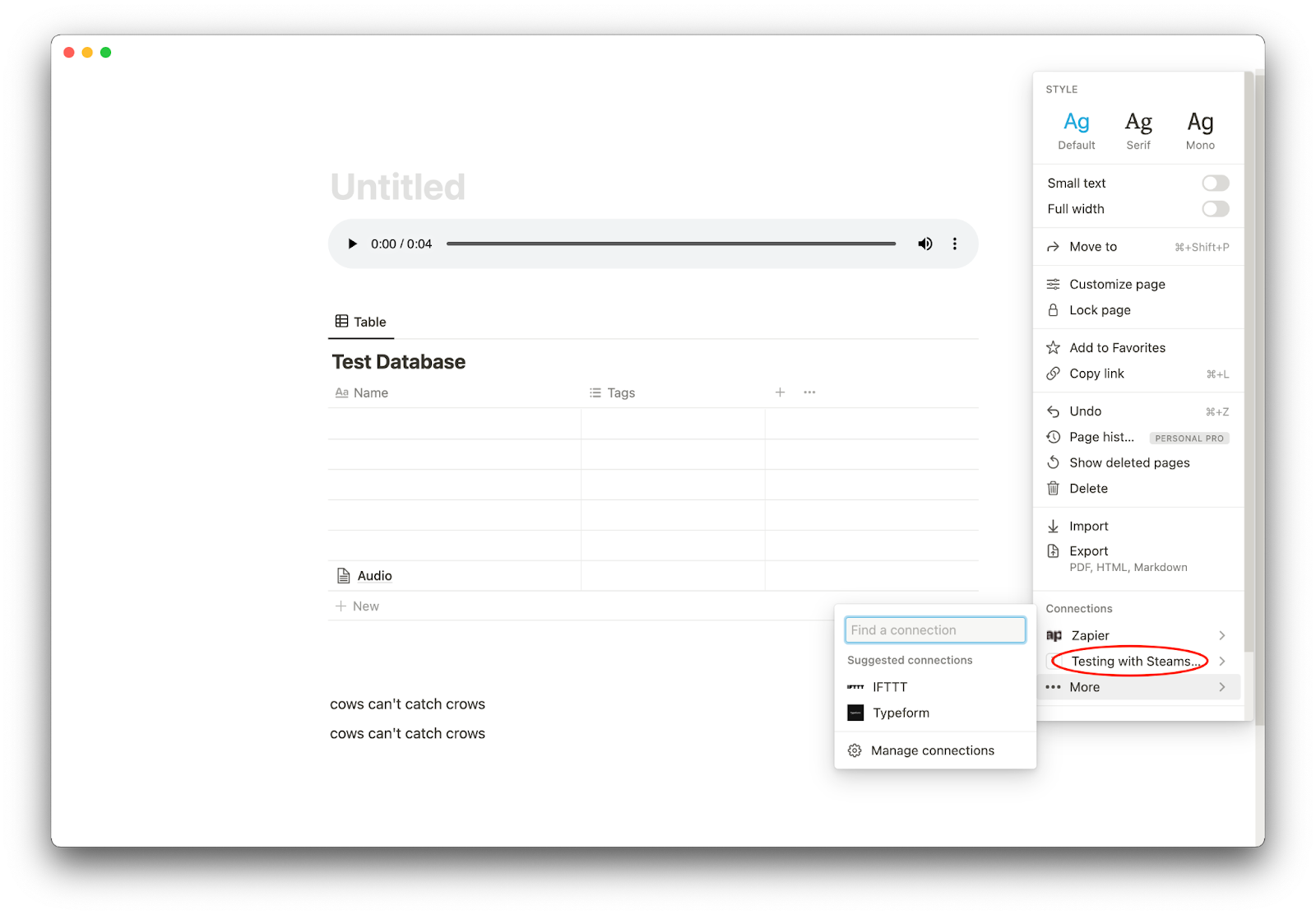 Once you have your app integration set up and you have copied your API key, it can be included in the header code. The header also states the current version of Notion and that the content type both expected and accepted will be of the json format.

We start the Python script by importing the necessary libraries: Dict, requests, and json. We use Dict to specify the expected type of the key and value pairs passed into a dictionary, requests to send URL requests and json to parse the JSON responses.

Next, we write a function called notion_headers to import the essential header information for Notion. For proper app connection, we need to use the API key Notion provides for our developer app. This function takes one parameter, our API key, and returns a dictionary, the necessary headers.

Next, we create a function to retrieve the path that houses our mp3 file. According to the Notion developer API documentation, we can use their provided endpoint to connect directly to our workspace. We use the requests library imported earlier to send an HTTP GET request to the Notion endpoint to return our data in a json format.

The notion_get function takes two parameters, a path to a block and our API key. The first thing we do in our function is generate the URL that we can get our block from via the Notion API. Next, we send a request and pass the headers we created earlier with the API key for authentication. Before returning the response, we convert it into JSON format. In this example, we also print out the response text and the JSON formatted response text for clarity and debugging.

Returning the Transcribed Text to Notion

We write a function called notion_patch() with the path of the mp3 audio block, the JSON formatted content, and the API key as parameters. It invokes the header information as well as an HTTP requests patch method to connect our JSON data to the Notion API endpoint. The Notion API documentation outlines how to properly define their block object types. The add_markdown() function takes the ID of the Notion page, the markdown transcription, and the API key as parameters. This function mimics their documentation and defines our specific paragraph block object content of audio markdown text data. This patch request will add a new block to our Notion workspace, which includes our audio markdown.

Steamship is a cutting-edge Natural Language Processing software built to let you add language AI to your software quickly and easily. The Steamship packages import into your code like standard Python modules, but they run on their own auto-managed stack in the cloud. And because they run in the cloud on an auto-managed stack designed for Natural Language Processing, you can quickly scale as many separate instances as you need without ever managing a heavy infrastructure.

Our application will blend these two apps together seamlessly and get us away from repetitive tasks and back to living our lives. To get started working with Steamship, we install the Steamship CLI and Python Library.

Once we have installed the Steamship CLI and Python library we can get started creating an automated way to transcribe audio files with Steamship. The first step is to create a Steamship package. Once we have created a package, we’ll see a folder structure like the one below.

The main changes we’ve made from the default package lie in the /src folder. Our /src folder houses four important files: init.py, api.py, notion.py, and a transcribe.py file. While we could store all the functions in one file, it is best practice to create modular code and split all the functions into aptly named files. The image below shows what our examples, src, and tests folders look like.

The audio markdown package is one of the four current bundles offered by Steamship. They provide great documentation and an up-to-date Github where they have written code we can place directly in our application. As before, we always start with importing the modules needed.

We complete the Python script by defining our function called transcribe_audio. This function takes two parameters, the URL to the audio file and a Steamship object. We start by using Steamship to spin up an instance of the audio-markdown package. Then we invoke the instance to transcribe our file.

The invoked code will execute on the Steamship NLP designated cloud infrastructure and return our audio markdown. If the request is unsuccessful, we’ll get a  status message that tells us  why. The code also limits the number of retries to 100 times to prevent the program from hanging. It’s also important to have the break clause in our while loops, so they don’t run infinitely and possibly crash our machine.

In our api.py Python file, the code blends the sub-programs we created together. We create classes to import each of the functions created above into their respective places to ultimately return our markdown file. Start by importing the modules needed to run the script. We also import the functions from our other Python scripts by their name.

We define a class called NotionAutoTranscribeConfig() that stores the security API key we received earlier for the Notion API integration. This is a required configuration function to connect to our Notion integration app.

Next we write the NotionAutoTranscribe() class. The class object merges the Python scripts we wrote earlier. Our class object invokes the required API key from our config class object to access the Notion integration. It then executes the notion_get() function we wrote to retrieve the path to our mp3 file block.

After parsing the returned information to discern the path-specified url to the mp3 audio data, the transcribe_audio() function calls Steamship to transcribe the given audio data. The transcribed text, “cows can’t catch crows”, prints to a new Notion block object using our add_markdown() function.

In this article we automated transcribing an mp3 file in Notion. We programmed our custom application to connect the project management tool, Notion, with the NLP Package Manager, Steamship. Our app finds the mp3 audio file we placed in our project workspace, deploys the Steamship bundle designed to process our audio file, and then returns the complete audio markdown directly back to our Notion workspace.